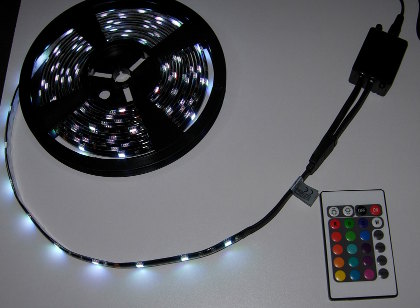 With flexible strips of LEDs becoming ever more affordable and easier available it might be tempting to use these strips for illuminating the shelves of a display cabinet: just stick a strip of LEDs to the lower front edge of a shelf to light the space below.
These strips come with either single color LEDs (of which 'white' is most useful for lighting purposes) or multi-color (RGB) LEDs .

Here are some reasons against using these LEDs as 'permanent' lighting for figure, doll or plastic scale model displays. 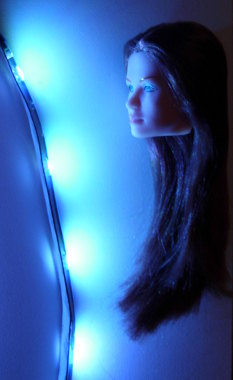 The 'white' light of the RGB LEDs contains a much larger amount of blue than is perceived by the eye (the human eye is less sensitive to blue) so what looks close-to-white to the eye looks predominantly blue to a digicam (even with the white balance of the camera adjusted).
The picture on the left shows the same RGB LED strip as the picture at the top of the page, emitting the same 'white' light. All I did was put a dolls head next to the strip and switch off the ambient lighting.

The limited color range of the RGB LEDs and the use of UV light in most 'white' LEDs were a bit of a disappointment to me, I hope this page will keep you from trying LEDs for lighting figure or model displays and getting disappointed as well

A year later most of the reservations I mentioned above still stand (most white LEDs emit UV, the flexible strips do emit plasticisers) but I recently bought a strip of multi-color LEDs (made up of tiny Red, Green and Blue LED elements) that do a pretty decent job of emitting white light: 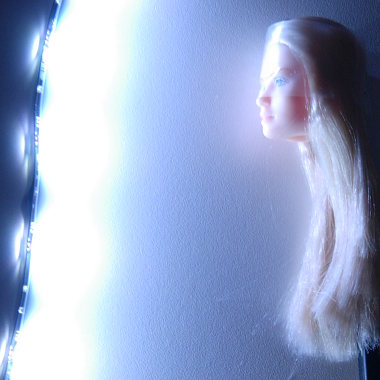 To both the naked eye and my digicam the emitted light looks bright white with a decent color spectrum.
The only downside I noticed is that the blue LEDs in these strips also emit some UV (like black-light: anything fluorescent will light up brightly).

These new flexible RGB LED strips are much brighter than the ones I bought last year and come with a remote controller with much more options, yet the set costs about 2/3rds of the price I paid for last years set. 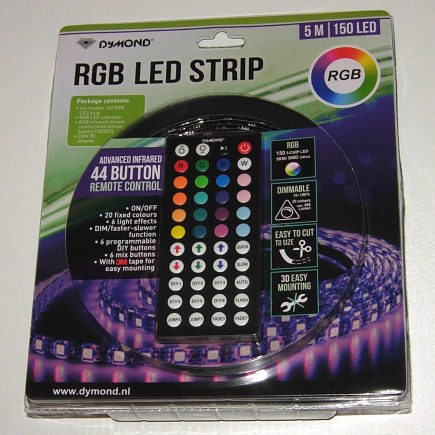 The picture shows the light at maximum brightness, it can be dimmed in 9 steps of 10% .
At maximum brightness this 5mtr long strip is rated at 16.5 Watts with a yield of 850 Lumen (that's equivalent to a 60 Watts incandescent bulb).
Apart from white light the controller included in the set allows the LEDs to emit a broad choice of colors.

Easiest way to tell the new sets apart from the older ones is by the larger remote controller, the old remote has 24 buttons, the new one has 44 buttons.

While I still would recommend against fitting these strips inside a closed display cabinet because of the UV emitted by the blue LEDs and the risk of the strips emitting plasticisers, the light of these new multi-color RGB LED strips does look suitable for illuminating scale models or figures.

I mounted both the white and RGB strips I bought on a piece of plywood and fitted that to the ceiling over my desk, resulting in a versatile light source that can be dimmed and adjusted for color.
However when using the RGB strips for lighting my desk I turn the blue LEDs off as the intensity of the blue light combined with the emitted UV light may cause eye damage (see link to report from French ANSES Institute for Health and Safety below).


In the meantime I did notice that even the combined 'warm white' and RGB light is lacking too many colors to be useful for photographing completed models and figures, in particular red values are lacking which makes skin tones look odd.
A measure for color rendering is the Color Rendering Index where pure sunlight has the maximum value of 100. A higher CRI value means better color rendering. An average Fluorescent Tube has a CRI value of about 80, color photography requires a CRI value of at least 90.
Apart from CRI the color temperature of white light is also relevant. A low color temperature value (2000-3000°K) indicates yellowish light and a high value (in excess of 6000°K) indicates blueish light. Average daylight has a color temperature of about 6500°K.
With LED strips there are usually no values for color rendering or color temperature supplied, LED bulbs usually do have these values listed.
A digital camera can compensate for a different color temperature by adjusting the 'White Balance' setting, but there's no compensating for a light source with a low CRI.

To help with determining a safe distance and position between UV radiating LEDs and subject:

I prefer to keep at least 50cm (20in) distance between LEDs and subject, however I do not use LEDs as a permanent light source for lighting scale models or figures.
In all cases the UV light emitted by LEDs is UV-A of long wavelength (380-395nm) so not as harmful as UV from direct sunlight.